These Byron GA homeowners were able to have their new deck on time, and they way they wanted it too

So many times quality is exchanged for haste, but not with this new Byron GA deck. These homeowners were hosting a big event for Memorial Day and had quite a list of things they wanted for their deck overhaul. As a testament to the whole team, which includes Archadeck and the homeowners, the new deck was finished just the way they wanted and was ready on time.

When the homeowners first called us, they had a poolside deck had taken quite a beating. It was aged and had splinters which made walking barefoot a bad idea. What made it worse is the deck served as the path between the house and the pool and nobody wants to wait until they’re poolside to kick off their shoes.

The homeowners had high standards for what they wanted on their deck and they weren’t willing to compromise quality for expediency. For example, they wanted lattice deck skirting but not the ordinary white lattice which can be picked up at any home improvement store. They didn’t have any white trim on their house so white lattice would have looked like a sore thumb. We special ordered almond lattice which required extra time but we made sure to get it delivered and installed in time. In addition, In addition to needing the almond color for the skirting, they also wanted to seal the railing and lattice framing with an almond color sealer. If we used traditional pressure-treated pine, they would not have been able to apply the sealant in time for the party since traditional pine requires about 90 days to cure. We ordered kiln dried wood which can be sealed right away. The family was adamant about meeting their quality standards so we did our job to get the upgraded materials delivered and installed. At the very end, our crew had to work on a Saturday morning to have every last detail attended to before the party. And they did. 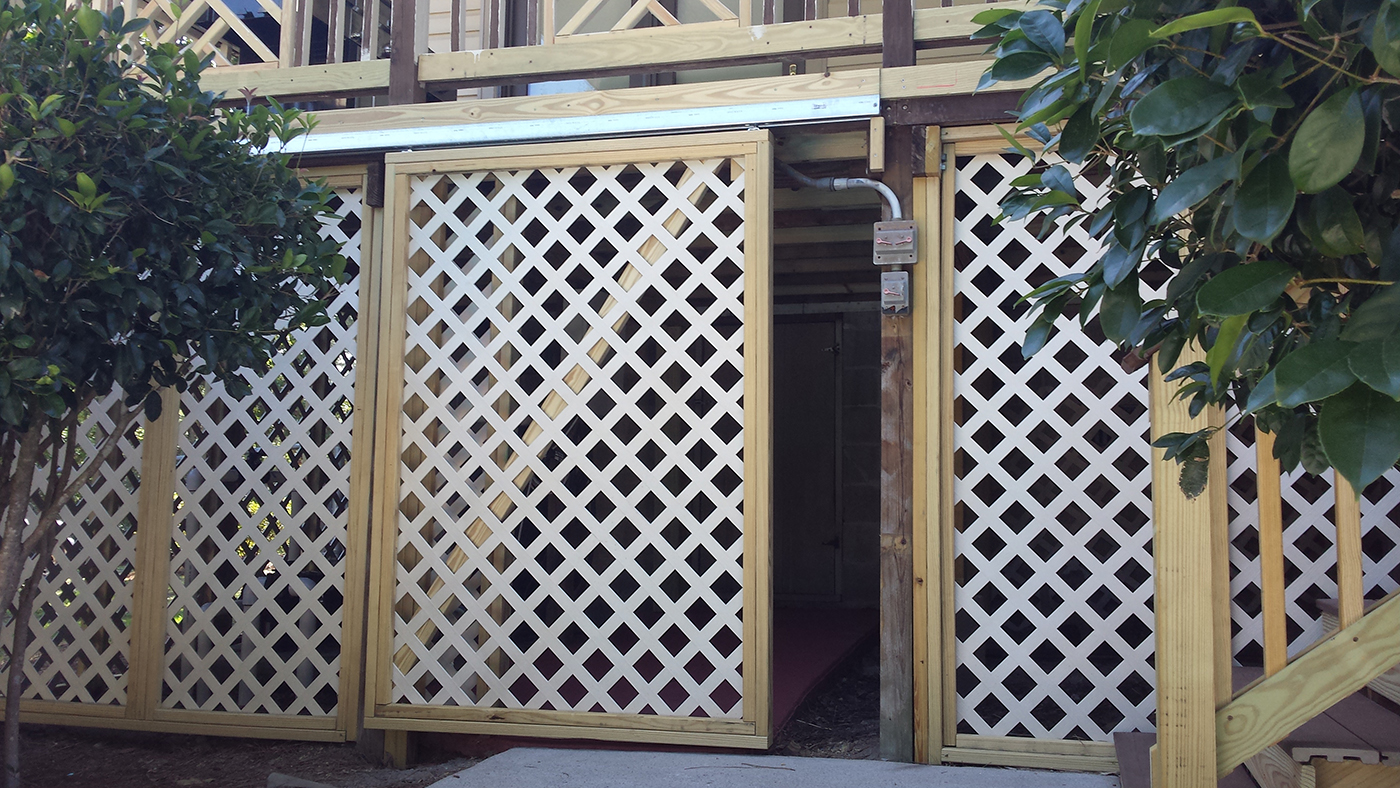 Above is a picture of the almond lattice skirting complete with a sliding barn-style door. There was no way to use a swinging door to access the storage area and the pool pump that resided under the deck. Whether a door swung in or out, it would hit something. We designed the sliding door to have a nice wide opening that didn’t intrude on anything either immediately inside or outside the skirting.

For the deck, we were able to create a deck that looked new while still using most of the understructure of the old deck. We did reinforce the support and add some joists but otherwise we utilized what was existing. We added timberTech Terrain in a Brown Oak color for the decking. Take a look at the diagonal decking pattern for a nice custom look to their deck. 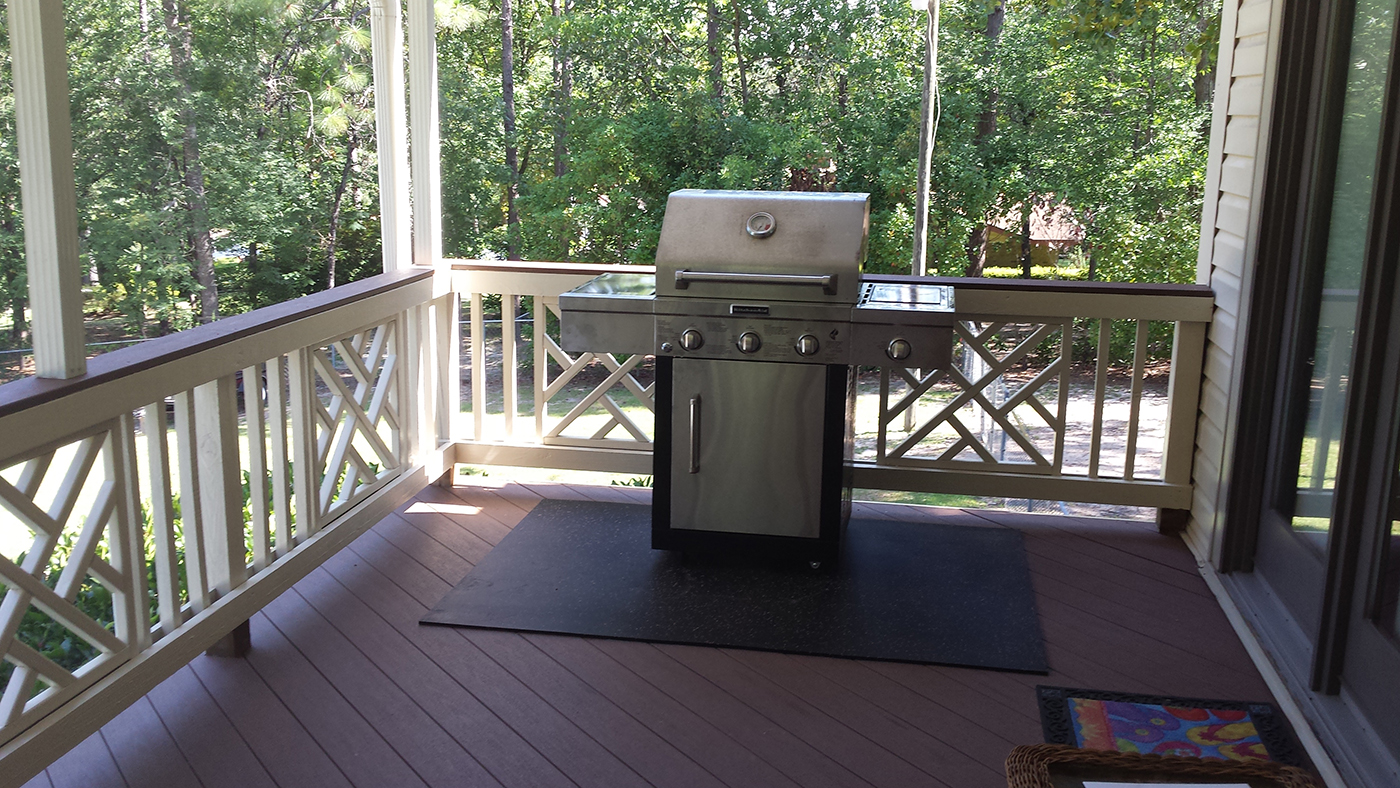 With the railing, they were looking for a Chippendale style. In keeping with utilizing as much of the old deck as possible, we removed the center portion of each railing section and added a new Chippendale section. You would never know if we didn’t tell you. We added a TimberTech rail cap that matched the decking. This accomplishes two objectives. First, it ties the deck and railing together. But in addition, the low-maintenance decking board does a much better job of standing up to the sun and standing water which is the beating that horizontal surfaces suffer. 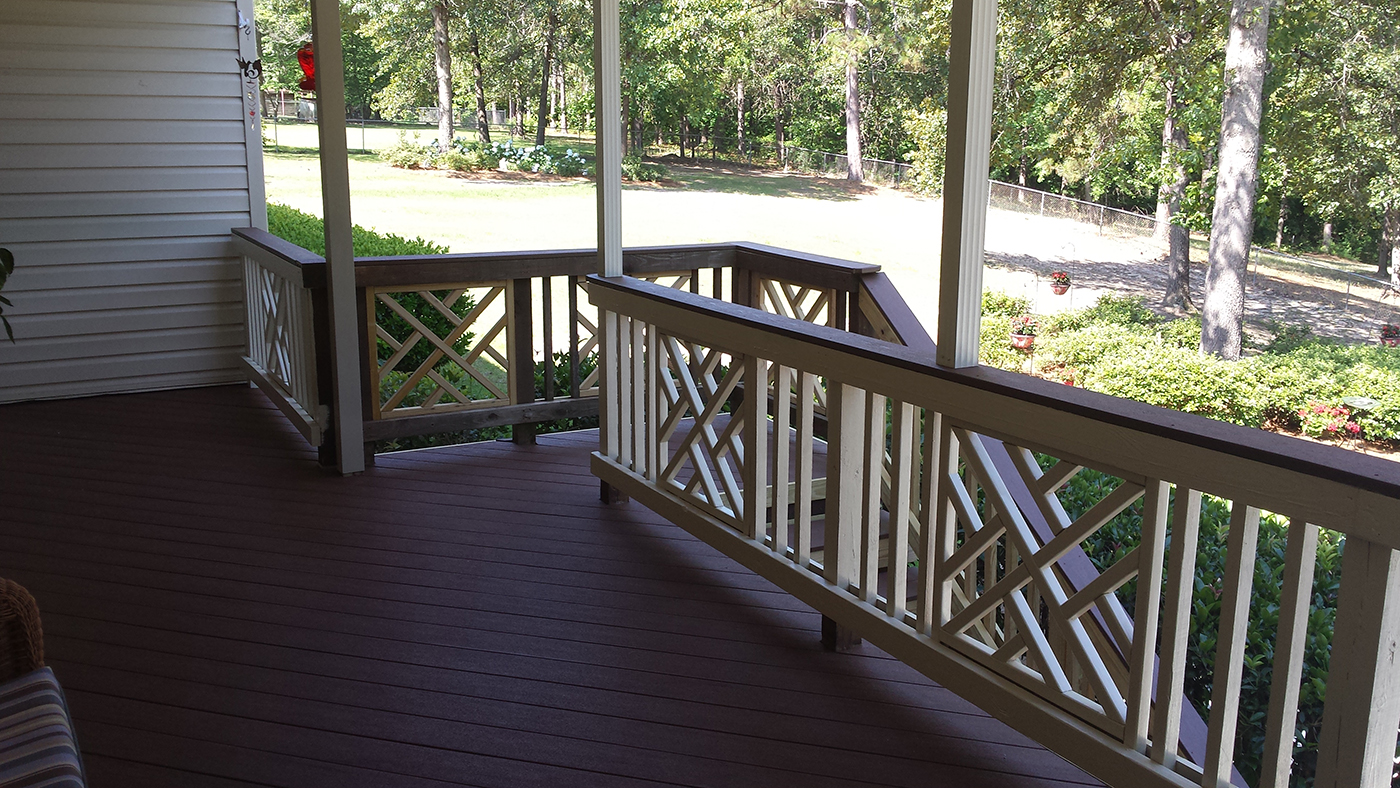 Take a look at the whole project shown in the picture below. We did have to rebuild the entire stair set to get the stairs up to the quality standard. This allowed us to tie in the last horizontal element with the TimberTech by using TimberTech for the stairs.

The project came together beautifully. It was done on time and not a bit was sacrificed in making this happen. 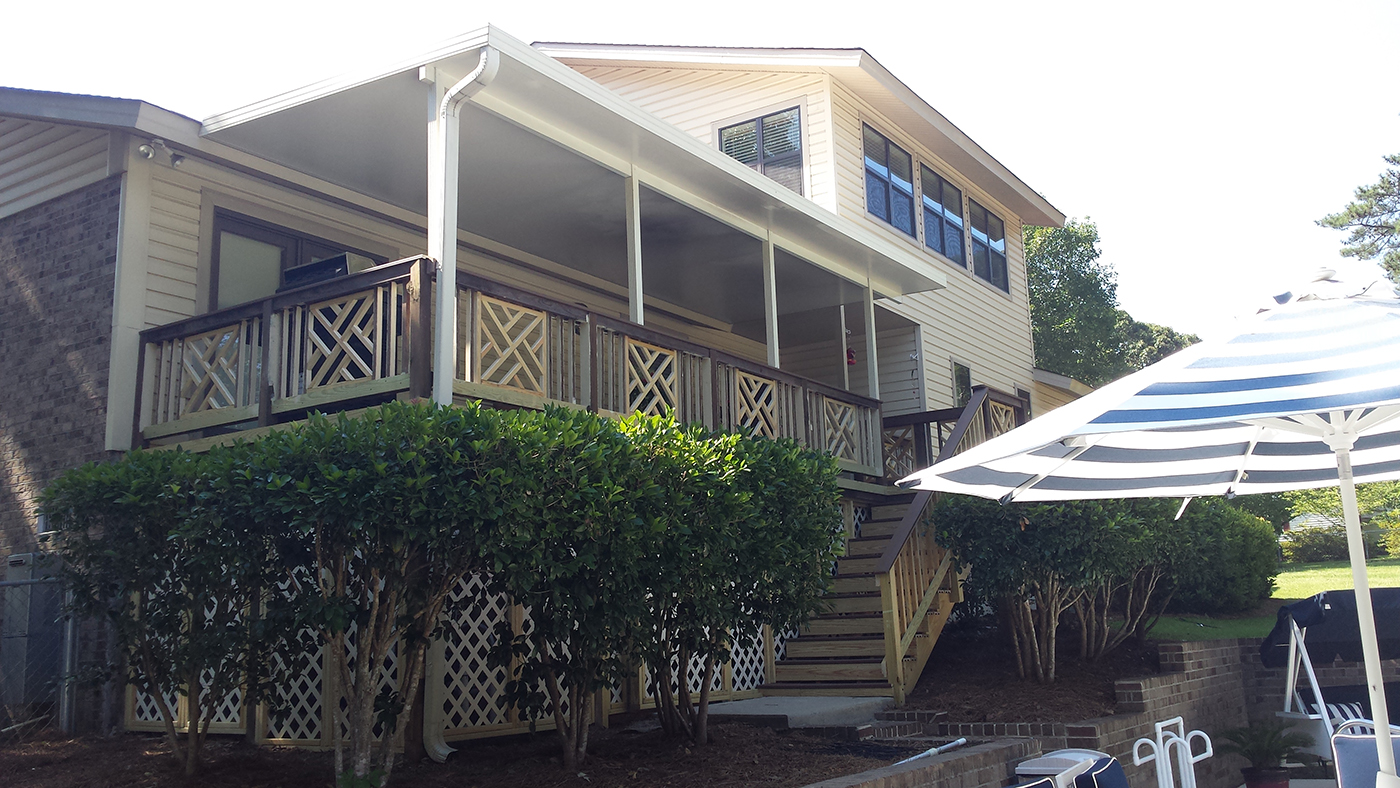 Contact us for a free consultation. Call us at 478-745-2000, email us or fill out the form below and we will quickly get in touch with you.